My wife and I have been throwing around the idea of chickens for a long time.  Its something we thought we would enjoy having and taking care of as well as collecting those wonderful eggs.  One Saturday, we researched the whole deal.  We bought books and a magazine, discussed our future chicken coop, and decided this is the year we're going to do it. 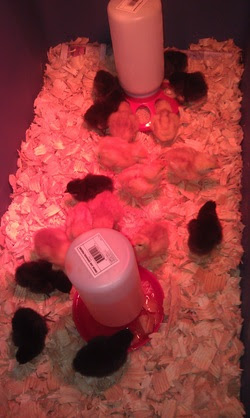 We were waiting till later in March (March is host to "chick days" at many farm stores) before purchasing our chicks so I could build a coop first.  On a whim though, we bought the chicks, all 18 of them, and made them at home here.  They're occupying a small space near our wood stove where the log rack normally is.  A mild winter and a warm spring made this an easy move for us.

A mere week later, our chicks are eating us out of house and home like teenagers.  They're beginning to feather out as well as peck and scratch a lot.  We've backed off the brooding light since they seem to be too hot (they're huddling in a corner far away from it).  They'll be outside at this rate but that brings me to another problem: the coop!

Many folks have kindly suggested, never buy chicks till you a coop ready for them.  I should have listened to that adage.  I'm fortunate to have the next several days off that I ordinarily would not.  With some help, I will be constructing a very fine hen house.  If it isn't finished in these few days, I will be in trouble as I won't have as much time to finish working on it.

My basic plan is for an 8' x 8' elevated coop.  The coop will be elevated approximately 2' including cinder block base.  The outside walls will be 2' with the middle as high as 3.5'.  The roof will be hinged for easy access inside as well as a hinged roof over the attached nesting box for easy egg gathering.  The very top will also include hardware cloth in a vented slat.  The floor inside will be vinyl coated hardware cloth over 2x4s so that the droppings can pass straight through.  Eventually I plan to add trays underneath to catch their manure for composting. 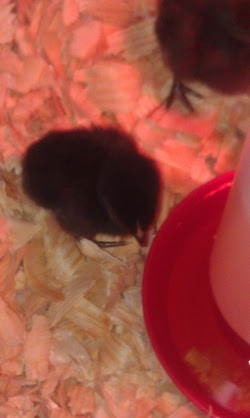 Once this is constructed, I'll post all the photos I can.  I hope my design works well as I have not seen a coop quite this large that was not walk in.  I had a couple factors involved: money and heat.  With a smaller design, it will be easy for the chickens to keep warm in this with their own body heat.  It is also cheaper to build it this way since I won't need as much material.

Popular posts from this blog

November 11, 2015
Its fun revving up the saw and felling a tree.  Its relaxing to rhythmically swing a maul.  Its delightful to hear the wood crack and pop as it splits.  The neatly stacked rows of seasoning wood are a proud accomplishment. Kindling is the one wood heat chore no one seems to like.  Its time consuming.  It can be dangerous.  The meager mound of kindling feels like a weak victory compared to tenacious, stacked cord wood. At least, that's how I felt.  I was never quite sure what to do with it.  I often gathered sticks and sometimes the wood bits from splitting.  When I tried splitting wood down to kindling size, it felt like it took forever.
Post a Comment
Read more

November 01, 2015
Drolet HT-2000 Since our old Blaze King bit the dust, we replaced it with the Drolet HT-2000.  It was a special order from Menards for $1099.  Wait and watch carefully, you can grab it with the 11% rebate.  Its free shipping to the store.  Otherwise, you're looking at a couple hundred in shipping fees to your home.  I also ordered the blower for $100.  Drolet will send a 25% off coupon after registering the warranty so it might be worthwhile waiting to order the blower.
Post a Comment
Read more